With its awe-inspiring cliffs and extraordinary subterranean caves dripping with stalagmites and stalactites, Cheddar Gorge in Somerset is one of Britain’s most dramatic landscapes, attracting over 500,000 visitors every year.

If you’re looking for the perfect base from which to explore Cheddar Gorge & Caves, The Bower Inn is just a 35 minute drive away. With delicious food menus, thirst-quenching drinks and comfortable rooms, our beautiful village inn ticks all the boxes.

The famous gorge and caves were formed over a million years ago during the last Ice Age, when water from melting glaciers formed a river which carved into the limestone rock beneath to create the dramatic cliffs and caverns we see today.

Visitors can purchase a ticket to gain access to Gough’s Cave, the largest and most impressive show cave in Cheddar with cathedral-like caverns decorated with stalagmites and stalactites. Gough’s Cave was also where the oldest complete skeleton ever found in Britain – the Cheddar Man – was discovered.

Also included in the entry ticket is entrance to the Museum of Prehistory (located opposite the caves), the Jacob’s Ladder climb, the interactive Dreamhunter’s exhibition in Cox’s Cave and the cinematic Beyond The View experience.

Included as part of a Cheddar Gorge & Caves ticket, climbing Jacob’s Ladder is an absolute must for visitors of Cheddar Gorge. It’s not for the faint-hearted (a steep 274 steps to the top!), but those who make it will be rewarded with incredible views of the surrounding Mendip Hills and the gorge below.

For those that really want to push themselves, 48 more steps will get you to the top of the Lookout Tower for panoramic views of the Somerset Levels to the south, and of the windswept plateau that runs for over 22 miles east-to-west if you look to the north.

From the top of Jacob’s Ladder, you can tackle the famous Cheddar Gorge Cliff Top Walk!

This is a breathtaking 3 mile circular stomp across the top of the two gorge ridges and is elevated over 900ft above sea level! You will be rewarded with unbelievable views over the rolling Mendip Hills, Somerset Levels and the village of Cheddar itself. If you are walking alone, the free-roaming flocks of primitive goats and rare Soay sheep will be there to keep you company!

For those looking to avoid the steep Jacob’s Ladder climb, the walk can also be accessed from within Cheddar Village, opposite the National Trust centre. Find detailed instructions here.

Now famous across the world, Cheddar cheese originates from the tiny village of Cheddar, with records of cheesemaking in the village dating back to the 12th century.

The caves of Cheddar Gorge were historically used to mature the cheese with their humidity and steady temperature providing the optimum conditions, a method still used today by The Cheddar Gorge Cheese Company – Cheddar’s only remaining cheesemakers.

Stop by their shop in the village to watch the traditional cheesemaking process from start to finish whilst enjoying some free tasters of their cave-aged Cheddar!

Directions To The Bower Inn From Cheddar Gorge

The Bower Inn is a charming 18th-century pub, restaurant and hotel situated on the edge of the Somerset Levels near Bridgwater.

To reach The Bower Inn from Cheddar Gorge (assuming you parked in one of the many areas on Cliff Road), then you must head south-west on Cliff Rd (B3135) towards Cufic Lane. At the roundabout, take the 2nd exit onto Tweentown (B3135) and continue onto The Barrows.

At junction 23, take the A39 exit to Bridgwater/A38/Minehead/Glastonbury/Wells and then, at Dunball Interchange, take the 1st exit onto A39. At the roundabout, take the 3rd exit and continue onto Puriton Hill (A39). After 1 mile, turn right onto Bath Road (A39), then take the 1st exit at the roundabout onto Bath Road/Bower Lane. After three-quarters of a mile, turn right onto East Bower and The Bower Inn will be on your left. 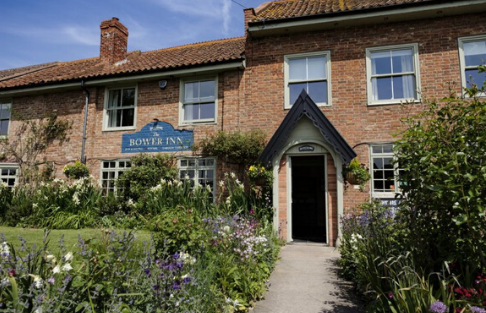