Due to the recent storms we currently have no WiFi or phone lines. Please make bookings via our website booking system.

A Visitor’s Guide To The Jurassic Coast

Spanning 95 miles between Devon and Dorset, the Jurassic Coast is a World Heritage Site on the English Channel where many of the United Kingdom’s most groundbreaking fossil discoveries have occurred.

If you’re looking for the perfect base from which to explore this stunning part of the world, The Castle Inn is a cosy, welcoming pub that is near to many of the sights and landmarks that the Jurassic Coast has to offer. We have 12 stylish boutique bedrooms with super comfy beds and stunning bathrooms, as well as fresh, seasonal produce and delicious Butcombe beer on tap.

One of the most photographed landmarks in the United Kingdom and certainly the most iconic part of the Jurassic Coast landscape, Durdle Door is a natural limestone arch that appears on many postcards and in many photo albums.

Durdle Door was formed more than 10,000 years ago when the sea eroded the limestone rocks and created the picture-perfect arch. It is privately owned by the Lulworth Estate, but remains open to the public all-year round, with as many as 500,000 people flocking to catch a glimpse of the famous arch each year.

Unsurprisingly, Durdle Door has featured in several films and music videos, while also being a favourite with many authors who have obsessed over the beautiful Dorset coastline. 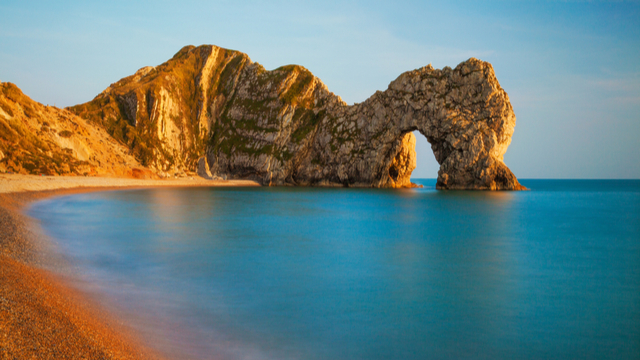 Man O’ War Beach (also known as Man O’ War Cove) is situated just 200 metres to the east of Durdle Door. Although not as popular as its more famous neighbour, Man O’ War Beach is a must-see when visiting the Jurassic Coast.

The cove is partially protected by the formation of the rocks which lie around 100 metres from the shore. With the water being much shallower at Man O’ War Beach than at Durdle Door Beach, this is definitely the most popular of the two spots with swimmers 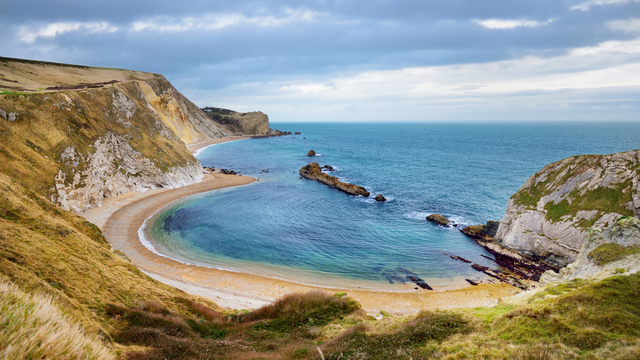 When debating the most popular spots on the Jurassic Coast, Durdle Door and Lulworth Cove will almost always be the topics of discussion.

While the former is definitely the most photographed part of the ancient coastline, the latter attracts equally as many visitors, with thousands of sightseers flocking to marvel at the unique  landform every day during the peak season.

Lulworth Cove is not just popular with tourists, but with geologists from around the world who descend on this site in order to study the distinctive rock types (which include chalk, limestone, clay and sandstone), all of which have contributed to the formation of this World Heritage Site over the last 185 million years. 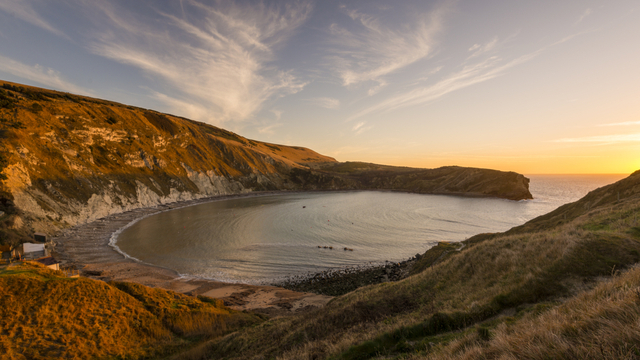 Heading in an easterly direction along the coast from Lulworth Cove will bring you to Mupe Bay Beach.

This beach is one of the most secluded on the Jurassic Coast, mainly because of the difficulty involved in accessing it. Not only is the cliff path steep and unforgiving, but you must also pass through land belonging to the Ministry Of Defence, so it isn’t always possible to reach the bay.

As the old saying goes, effort equals reward, so if you are able to reach Mupe Bay, you won’t be disappointed. The east side boasts looming chalk cliffs, while the west side is dominated by the Mupe Rocks. The beach itself is crescent-shaped and covered mainly in shingle, with soft sand being exposed at low tide. If you want to avoid the crowds on the Jurassic Coast, Mupe Bay is the place for you! 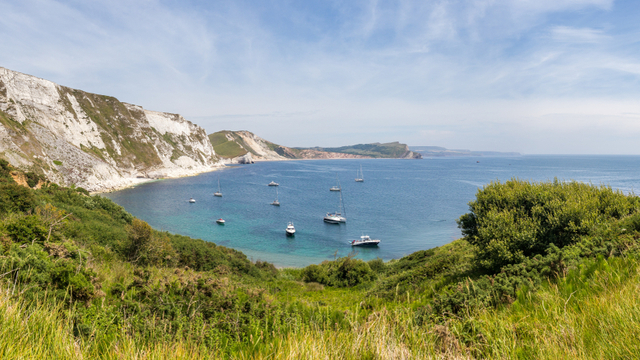 At the most eastern point of the Jurassic Coast stands Old Harry Rocks, a formation of chalk stacks that have become one of the most famous landmarks on the south coast.

Old Harry is the rock that stands furthest out to sea, while its companion is known as Old Harry’s Wife. There was a third chalk stack (the original wife of Old Harry), but erosion reduced this to a stump at the end of the 19th century.

There are many rumours that suggest how the rocks came to be named, with one of the most prominent tales implying that the name Old Harry may refer to a local pirate called Harry Paye. A more sinister theory is that Old Harry is actually named after the devil, a suggestion that is backed up by the fact that the top of the neighbouring cliff is known as Old Nick’s Ground (which is another term for satan). 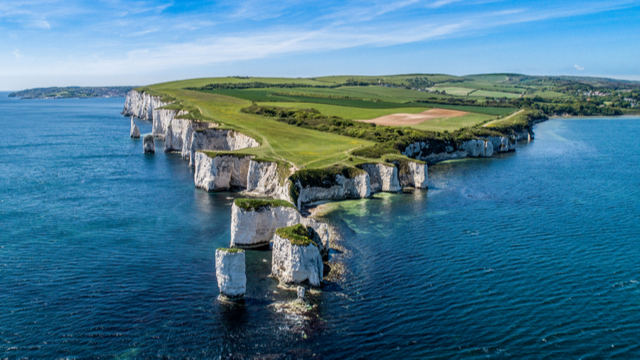 Occupying the position at the southernmost point of Dorset, Portland Bill is situated on the Isle of Portland.

With Portland’s coast responsible for multiple shipwrecks over many years, lighthouses have been in use at Portland Bill for the last 3 centuries, the most recent of which has been operational since 1906 and is one of the area’s main attractions. The Trinity House Landmark (or Trinity House Obelisk) was unveiled in 1844, also with the purpose of warning ships of the potential dangers of passing too close to the coastline.

Another landmark that attracts visitors to the area is Pulpit Rock. It was created in 1870 by workers at the nearby quarry and took its name because it depicts a bible laying on a pulpit.

Born in 1799, Mary Anning was an English palaeontologist who was responsible for some of the most famous discoveries along the Jurassic Coast.

Coming from a family of fossil collectors, Mary’s first notable discovery came in 1811 at the age of 12. Her brother had located a large skull between Charmouth and Lyme Regis, but was unable to find the remainder of the skeleton. After sharing the location with Mary, she combed the area and unearthed the skeleton (later confirmed as a crocodile) a few months later.

That was the first of many discoveries by Mary, with other important findings coming over the next 3 decades until her untimely death in 1847. After the crocodile (Ichthyosaurs) discovery, Mary went on to find multiple lizard (Plesiosaurus) skeletons and is credited with the first Pterosaur (flying reptile) discovery in the United Kingdom. 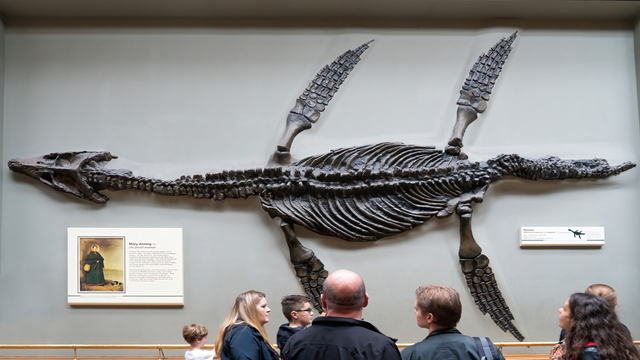 Located in beautiful West Lulworth, The Castle Inn is a traditional pub and hotel that boasts 12 sumptuous bedrooms and a history dating back to 1660 – making it one of the oldest inns in Dorset.

Rustic and cosy, The Castle is the ideal base for exploring Dorset’s stunning Jurassic coastline and the beautiful countryside of the Isle of Purbeck. It is within walking distance of must-see Dorset attractions like Lulworth Cove and Durdle Door.

On the menu, our focus is seasonal ingredients, locally sourced produce and exciting pub classics, with award-winning Butcombe beer, local cider, wine and classic cocktails behind the bar. 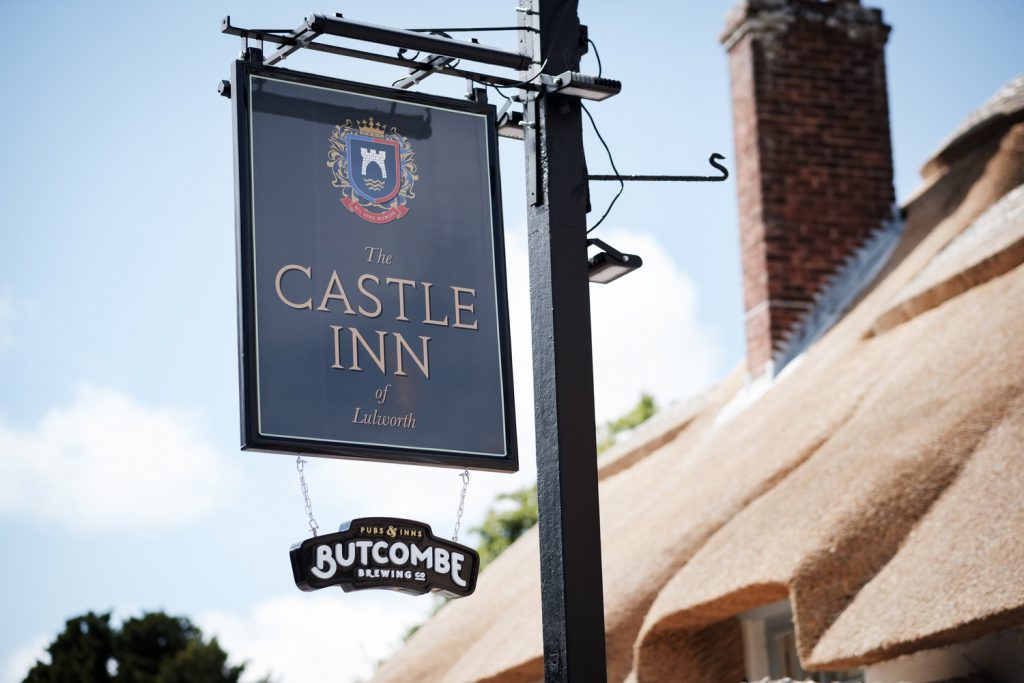